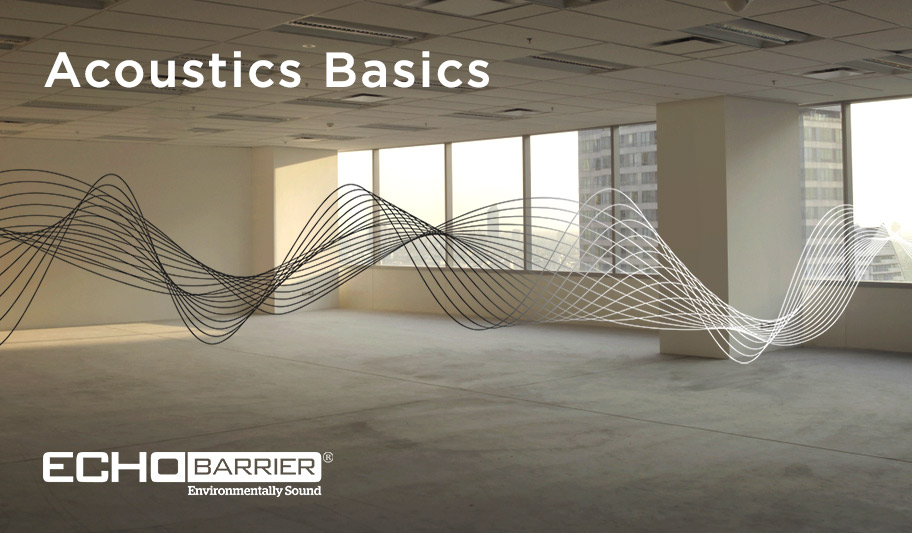 Acoustics – the science of sound – is something that can easily confuse the layman, especially given its “invisible” characteristics. At Echo Barrier, taking the laws of physics and applying them to effective noise abatement is what we do every day in both the design and implementation of our acoustic barriers and noise enclosures.

As manufacturers of noise reduction products, we emphasize the importance of our clients’ understanding of acoustics and subsequently how it is exactly that Echo Barriers are the world’s most effective and convenient means of portable noise control. This guide will help anyone understand some of the fundamentals of acoustics.

Acoustics, according to Wikipedia, is:

“The branch of physics that deals with the study of all mechanical waves in gases, liquids, and solids including topics such as vibration, sound, ultrasound and infrasound.”

The term “acoustics” is derived from Greek, meaning “of or for hearing, ready to hear”. The study of sound extends back to ancient Greece where it was ascertained that sound behaved very similarly to waves of water, noting the compressions and rarefactions of air as the energy passes through it. Implementation of acoustic principles can be observed in design and architecture throughout ancient history; consider the design of amphitheaters like that at Epidaurus like and structural marvels such as Rome’s great Colosseum.

The entire spectrum of wave propogation is divided into three distinct sections: audio, ultrasonic, and infrasonic. “Audio” defines the frequency range within which sounds are audible to the human ear; that is, between approximately 20 Hz and 20 kHz in a healthy human. Ultrasonic refers to very high-pitched frequencies beyond our hearing range, 20 kHz and above, which are useful in medical imaging practices such as ultrasonography and elastography. Infrasonic frequencies are those below 20 Hz and with longer periods, and are applicable to sciences like seismology.

The decibel (abbreviated dB) is the unit of measurement most known for its to measure sound, but it is also used in communications, signals and electronics. It is a logarithmic expression of the difference in power between two sounds. What this means is that if one sound produces twice the power (or acoustic intensity) of another, it will read 3 dB higher. For example:

This is a simplification of a complex scientific concept, but it helps to get a grasp of how decibels are used.

The following graph plots a visualization of the logarithmic function of measuring sound in action, which each emitted noise 3 dB quieter than the previous (listen to the sound through the source link below the image). A decibel is one tenth of a bel, a unit named after telecommunications pioneer Alexander James Bell. 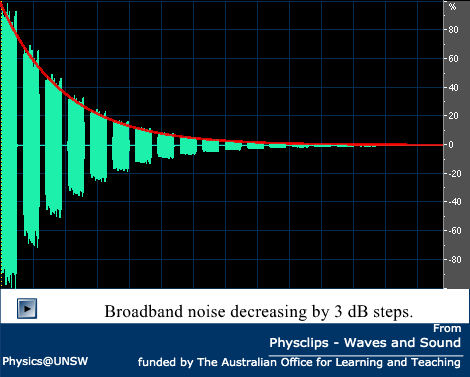 Within the audible human hearing range of 20 and 20,000 Hz, our perception of loudness is not equal across all frequencies. This means two sounds at the same sound intensity but oscillating at different frequencies will likely be perceived to have different loudness in the human ear.

This phenomenon has been studied, and the differences in loudness perception can be plotted onto a graph in what is referred to as “equal-loudness contours”. Using a unit called “phons”, we can designate a reference point for all frequencies at a given sound intensity, resulting in the different contours. By definition, 1 phon is equal to 1 dB at 1000 Hz.

Take 1000 Hz at 20 dB SPL, or 20 phons, for example. According to the corresponding 20 phon equal-loudness contour, for sound at 100 Hz to be perceived to be equally as loud, it has to measure around 46 dB, whereas at 6000 Hz will be received by the human ear at the same loudness at 20 dB SPL.

What this means is that our ears are more sensitive to some frequencies than others, especially 2000-6000 Hz. Incidentally, this is the range within which the rich harmonic series created by human speech falls, containing details of articulation and formants, which facilitates differentiating things like vowel sounds, often a trait attributed to evolution.

It can also be noted that the louder the noise source/s, the smaller the perceived difference in loudness across different frequencies, denoted by the contours becoming flatter with higher phon readings.

Decibel Weighting: A, B, and C

Measuring instruments used to take decibel readings are sensitive to all detectible sonic frequencies. However, as we’ve learned from the equal-loudness contours, we don’t perceive all frequencies equally. To provide a reading truer to human response, an “weighting” can be applied, reducing the instrument’s sensitivity to high and low frequencies. This weighting roughly follows an inverted shape of the equal-loudness contours, effectively “flattening” out the frequencies, resulting in a more realistic measurement.

Because the equal-loudness contours flatten themselves out at higher sound levels, it is useful to have weightings with slightly different shapes for different applications and sound levels. A-weighting is the most commonly used weighting and follows the general inverted shape of the equal-loudness contour at 40 phons. B-weighting follows the contour at 70 phons, and C-weighting at 100 phons, making it useful for very loud noise measurements (100 decibels and above). 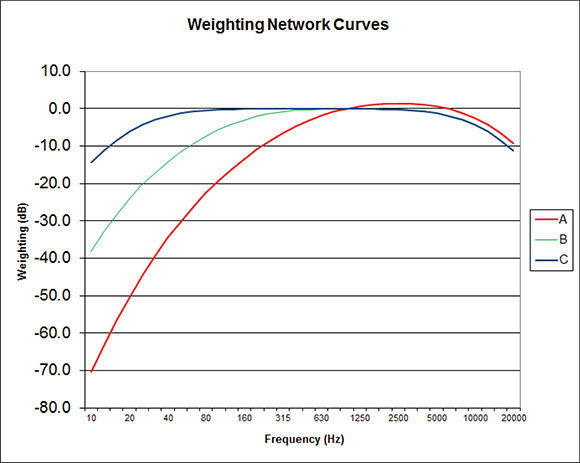 Sound bounces to varying degrees off of surfaces it comes in contact with. This “reflection” of sound waves is common among all types of waves, such as light and waves in water. The amount of sound that is reflected depends on the material of the surfaces. Hard, non-porous surfaces like glass, concrete, brick, and wood reflect around 95% of the sound that comes into contact with them. After enough time, sound in these environments either become fully absorbed by the surfaces or disappears externally through air gaps. The extent of this absorption affects the duration of the reverberation (“reverberation time”) and also how audible the sound is on the other side of the surface (usually a wall separating another room: see more on “transmission loss”).

Reverberation is the result of this sound-reflecting repeatedly off multiple surfaces in an enclosed environment until it is completely absorbed by walls, ceilings, people, furniture. These reflections must return to the listener within about 0.1 seconds to be considered reverberation. This is because, within this time period, the brain doesn’t have enough time to differentiate the source from the reflection. This occurs in rooms with surfaces that are closer than 17 meters from the listener. When the reflective surface is greater than this distance, the listener can begin to perceive a delay in the reflection, creating an echo.

Reverberation time is the time it takes for the sound’s reflections to be completely absorbed by the room. For example, an empty stone room with no objects in it other than a listener and noise source will produce greater reverberation time than the same room equipped with furniture and with carpet on its surfaces.

An acoustic shadow is formed when some type of barrier impedes the spread of sound through its medium, often a wall, building, trees, other geographical obstructions, or even people. Consider the effect of a shade on a lamp casting light in a room, blocking much of the light from the bulb. The amount of light that passes through the shade is equivalent to a sound’s transmission loss, ie. how much sound is able to be heard on the other side of the barrier. 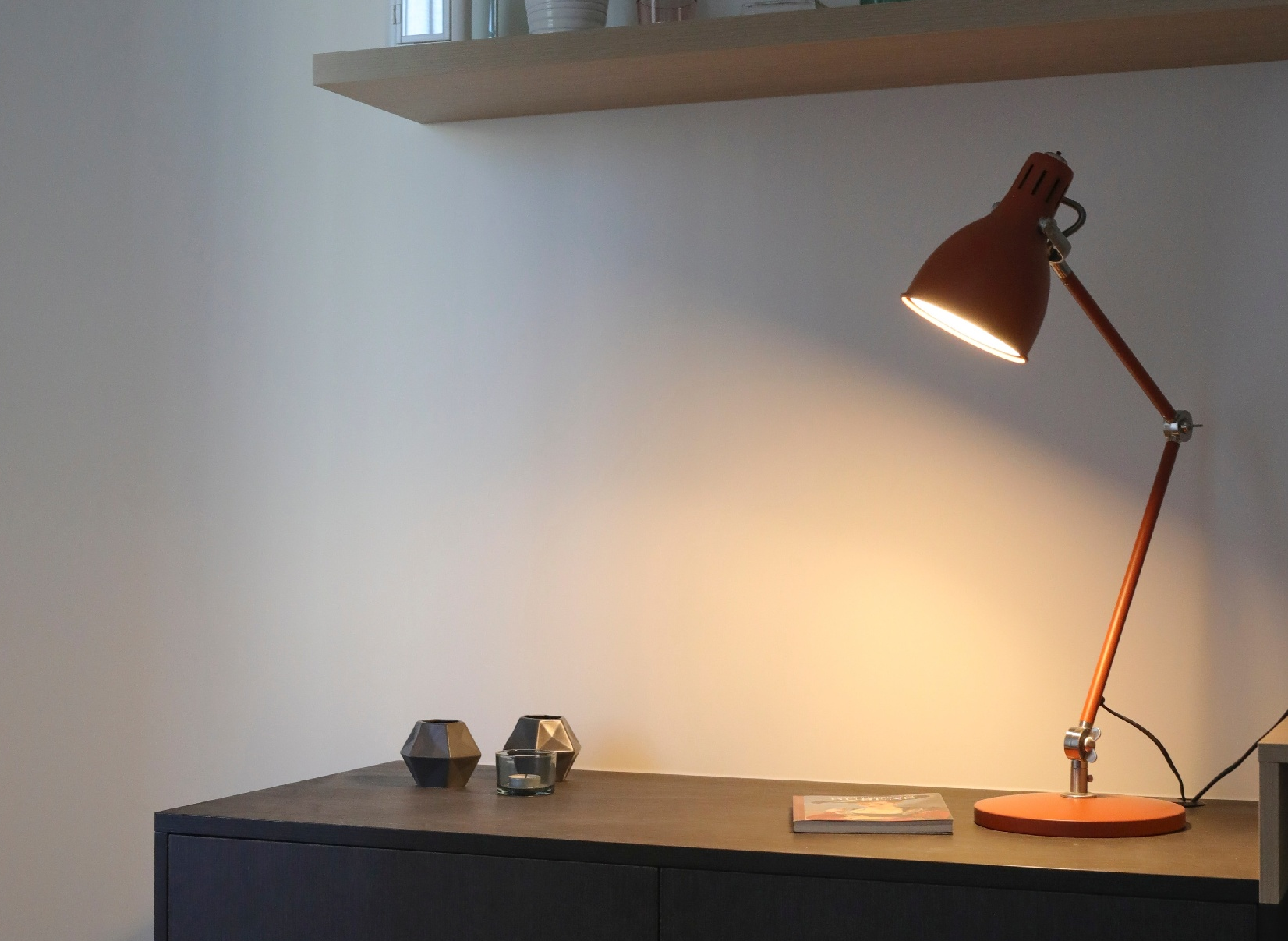 The phenomena of sound wave behaviour such as diffraction and acoustic shadows can be observed in light.

Like all wave types, sound waves diffract when they meet a gap in a barrier. What this means is that they pass through the gap, but also spread out into the area beyond the gap and into the acoustic shadow to varying extents, depending on the frequency (higher frequencies diffract to a lesser extent). This is how you can still hear a noise on the other side of a barrier separating you from the noise source. Referring back to our lamp, if we had a perfectly impermeable black shade covering the light, the small amount of light that reaches into the shadow is as a result of diffraction. 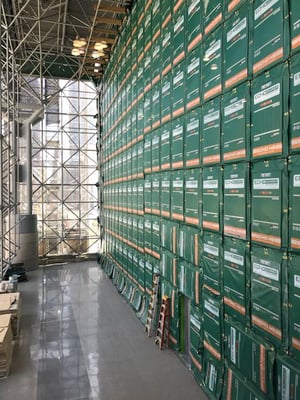